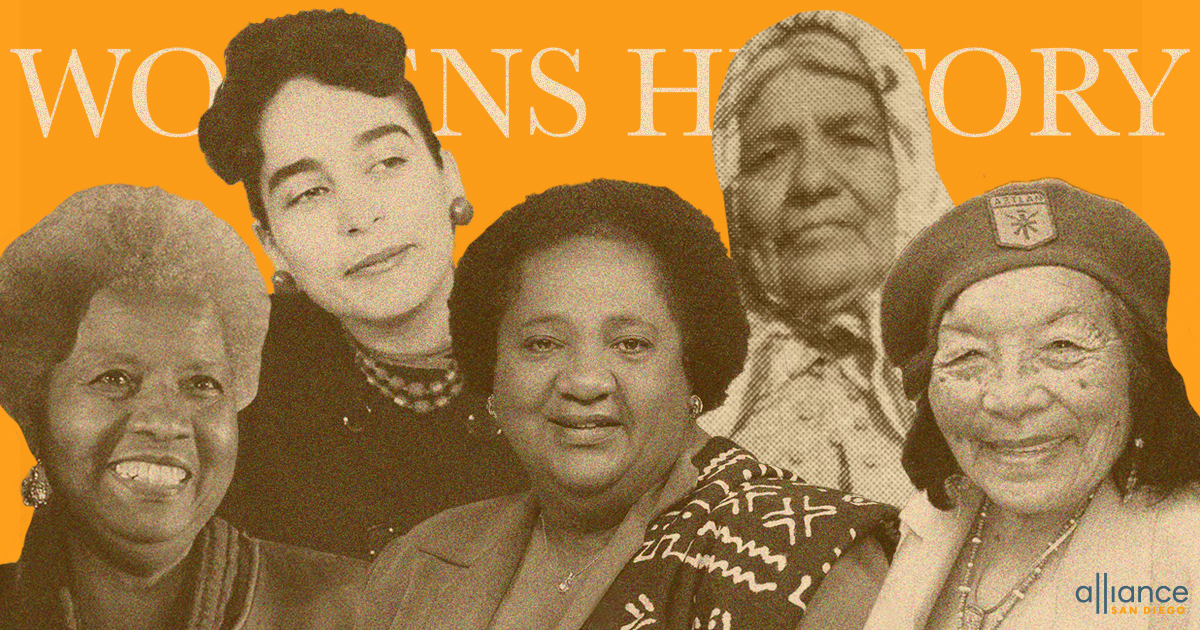 During Women’s history month, Alliance San Diego is honoring the women who have fought for social justice here in the San Diego border region. Here are five women who brought about change in their communities and beyond.

Ms. Walker is a longtime resident of San Diego, who has dedicated her entire career to building community. Ms. Walker recently retired as the Executive Director of the City of San Diego’s Human Relations Commission, which is devoted to issues of equal opportunity, conflict resolution, violence prevention, multiculturalism and diversity. Prior to that position, she was an administrator at the YWCA for 13 years, where Ms. Walker pioneered programs and created resources to eradicate domestic violence. Currently, Ms. Walker serves on the board of the Family Justice Center Alliance, and the San Diego Domestic Violence Council. She previously served as a member of the Grants-making Committee of the San Diego Foundation for Change and the Gay and Lesbian Funding Partnership Committee of the San Diego Foundation, and as the Chair of the Board of the San Diego Women’s Repertory Theatre. She is the recipient of numerous awards for her unwavering commitment to social justice. She is also the Board Chair Emeritus of Alliance San Diego.

Delfina Cuero was a Kumeyaay woman born in the year 1900, in Xamca (now known as Jamacha, a neighborhood of Southeast San Diego). The Kumeyaay people occupy territory around the greater San Diego/Tijuana region which is now bisected by the U.S./Mexico border. Many Kumeyaay people were displaced from the region by an influx of non-native settlers, and Cuero’s family eventually were forced to move to Baja California in Mexico. Cuero married Sebastian Osam and had five children who survived, but when her husband died, Cuero became the sole provider for her family. She worked as a domestic worker for non-native people, and when she tried to return to California during the 1960s, the United States government denied her access because she had no documentation to prove her place of birth. With the help of anthropologist Florence Connolly Shipek, she wrote an autobiography, The Autobiography of Delfina Cuero, which was published in 1968. The book helped document her California residency claim and Cuero was allowed to return to southern California in 1967. She died there in 1972.  Her autobiography provides an important record of the history of indigenous tribes in southern California and the impact of border militarization upon native communities who have traditionally lived and traveled on both sides of the U.S./Mexico border.

Irene Perrariz Mena was born in 1929 and was of Mexican-Fillipino descent. She grew up in the neighborhood of Logan Heights and became involved in the civil rights movement during the 1960’s. By the mid-1960’s the community of Logan Heights was bisected by the Interstate 5 freeway, and when the Coronado bridge was built, it also cut through the heart of the community. Many families were displaced by the freeways. The community of Logan Heights was not consulted, and their voices were not heard by the city. Residents of Logan Heights had asked the city for a park to help connect the separated sides of the community, but after the city had promised a park, construction began under the Coronado bridge to build a highway patrol substation instead. This was the last straw for the Chicano community in San Diego. As a Brown Beret, Irene Mena was one of the leaders who would march on, defend and take over the piece of land under the Coronado bridge that is now known as the historic Chicano Park. She was also instrumental in the opening of the Centro Cultural de la Raza, the take over of the Logan Heights Clinic, and served on the Chicano Park Steering Committee. She was recognized as the Honorary Grandmother of the Brown Berets. Mena passed away in 2020 at the age of 91. Click here to donate to her memorial fund.

Dr. Shirley Weber was born in Hope, Arkansas and raised in Los Angeles, California. After earning her Bachelors, Masters and PhD in communications from the University of California, Los Angeles, she would go on to become a professor of Africana Studies at San Diego State University, where she would help to establish that department in 1972. Weber would go on to serve on the San Diego Board of Education, as well as the Chairwoman of the San Diego Citizen’s Equal Opportunity Commission. In 2012 she was elected to the California State Assembly where she would be re-elected 4 times. She authored the California Act to Save Lives, which set new higher standards for use of deadly force by police. Weber’s legislative agenda has also included bills on education, civil rights, public safety, food insecurity, protections for persons with disabilities and voting rights. In 2021 she was sworn in as the first African American person to serve as the California Secretary of State.

Gracia Molina Enriquez de Pick was born in 1928 in Morelia, Michoacan. Growing up in a politically active family, her grandfather, Andres Molina Enriquez, was a key intellectual in the Mexican Revolution who wrote the first draft of the new constitution’s land reforms. As a young woman, Gracia pushed for women’s suffrage in the outdoor markets in Mexico City. She won that fight and moved to San Diego, where she spent the next 60 years pursuing other causes. She graduated from San Diego State and taught junior high students in National City. There, she noticed that many of the Mexican-American students were being put in special education classes because Spanish was their first language, so she organized the parents to fight for better educational opportunities. Amidst the civil rights movement in the late 1960s, she helped develop a plan to implement Chicano Studies programs at colleges and universities throughout California. As a hand-on activist, she regularly participated in demonstrations on college campuses, anti-war protests, and worked with the Mexican American Youth Association (MEChA). Gracia founded IMPACT, a grass-roots civil rights organization, and Comision Femenil Mexicana Nacional, a national feminist association. She was a leader with the National Women’s Political Caucus and the National Council of La Raza, and organized Chicana participation at various United Nations conferences on women. Locally, she served on the Human Relations Commission for San Diego city. In 2008, she published a book about indigenous women in Mexico, “Mujeres en la Historia & Historias de Mujeres.” Gracia lived her life as an influential and noteworthy educator, feminist, social activist, mentor and philanthropist before passing away in 2005 at the age of 91.