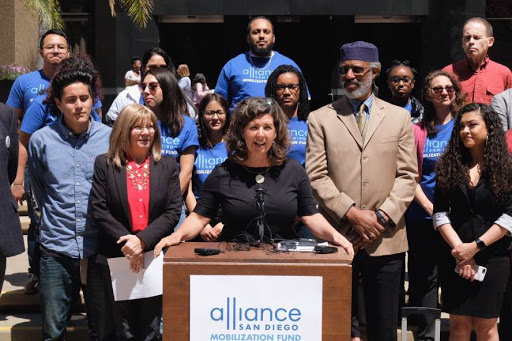 On Monday, In a 5-4 decision, the San Diego City Council betrayed voters by moving the mayor’s hotel tax initiative to expand the convention center from November 2020 to an earlier election in March 2020, when fewer people vote, despite the fact that two-thirds of voters who approved Measure L in 2016 expressly asked council to limit initiatives to November elections, when the most people vote.

Over 30 organizations, including Alliance San Diego, sent a letter to the city council urging them to respect the will of the voters and keep the mayor’s initiative on the November 2020 ballot. Alliance San Diego remains committed to fighting for a more inclusive democracy and thanks Councilmembers Bry, Montgomery, Moreno and Ward, who upheld their duties as public servants, and stood with the voters, by voting against the resolution. Read our affiliated Alliance San Diego Mobilization Fund’s press release here.