The History of the All Peoples Celebration 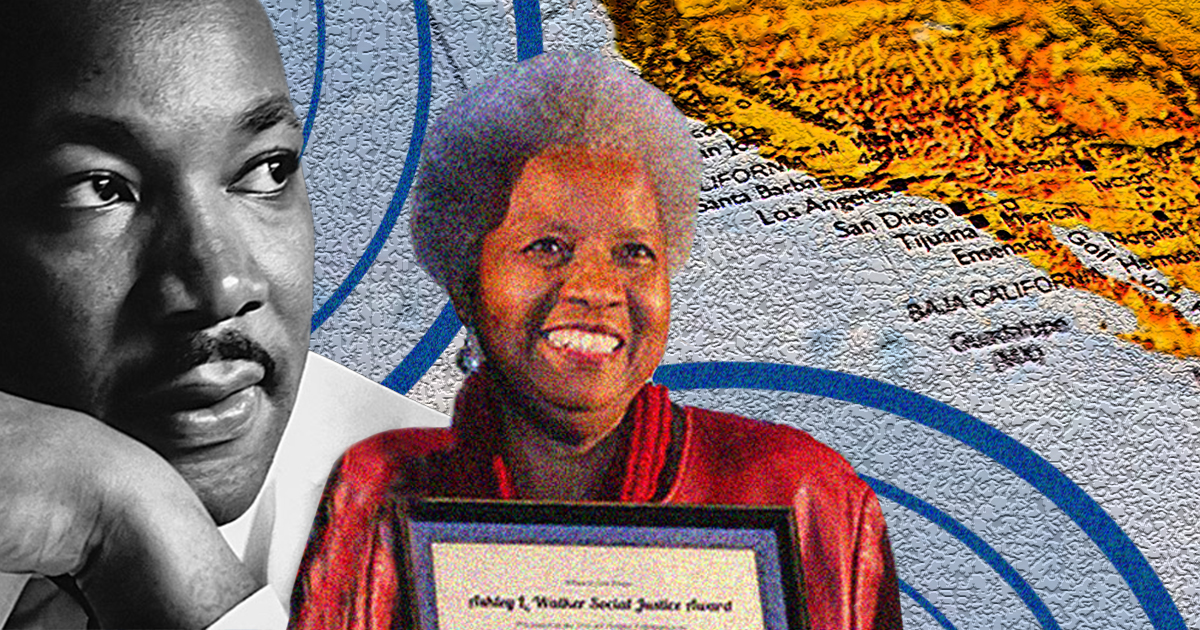 For over 30 years, the All Peoples Celebration has honored the life and legacy of Rev. Dr. Martin Luther King Jr. in San Diego. The All People’s Celebration is a chance for diverse community members across San Diego and across the movement for social justice to gather and reflect on the teachings of Dr. King and what it means to build an inclusive democracy together here in San Diego and across the country.

We’d like to share how this event came to be during the 1980’s and how Alliance San Diego has carried the torch to hold this event in honor of Dr. King.

Click here to register for the 33rd annual All Peoples Celebration

Before we can understand how the All Peoples Celebration came to be, first we need to understand how Martin Luther King Jr. Day became a holiday, and how it set the context for what was going to happen in San Diego as a result. In the years after Dr. King was assassinated, efforts to honor the civil rights leader through federal and state holidays sprouted across the country. After years of Oakland high school students pressing politicians to recognize Martin Luther King Jr. Day as a state holiday, the students garnered enough support from local elected officials, and a bill was introduced and signed by Governor Jerry Brown in 1981. California’s first Martin Luther King Jr. Day was celebrated in 1982. The next year in 1983, President Ronald Regan signed the federal holiday into law, but it was first observed & celebrated in 1986.

In San Diego, the same year that Martin Luther King Jr. Day was first celebrated as a federal holiday, the San Diego City Council passed a resolution to rename Market Street, Martin Luther King Way, following the example of many other cities at the time. However in 1987 a referendum backed by downtown businesses overturned the 1986 city council decision, and restored the name to Market Street. This shameful outcome galvanized local activists to address the racism in this decision and their experience in the process. 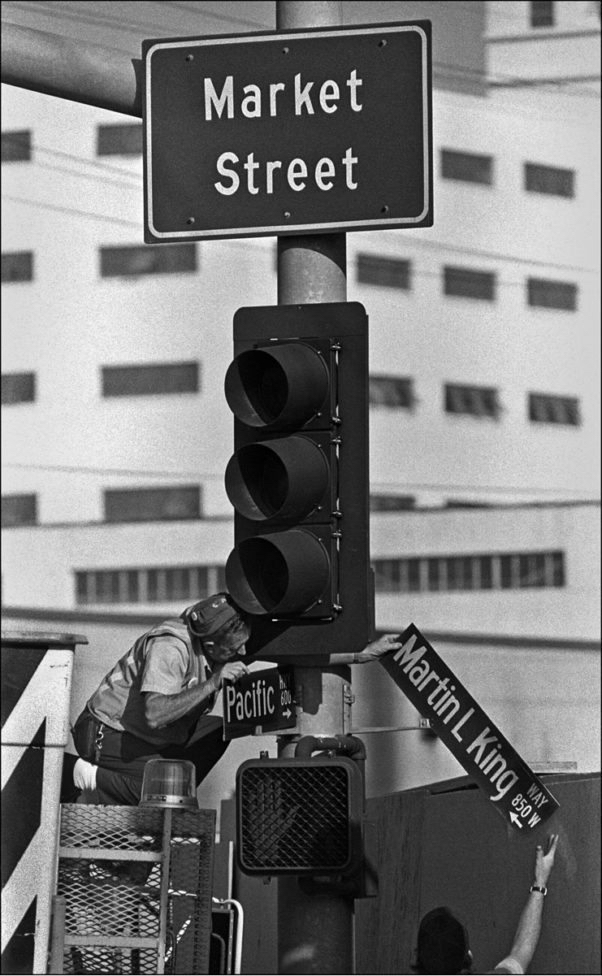 In 1988 the Port of San Diego supported a request from the San Diego City Council to name the new convention center after Martin Luther King Jr. However, in 1989, they reversed their decision, yet again causing backlash and steeling the resolve of the community to ensure that Dr. King and his teachings would be honored in San Diego. Artists and activists sponsored a billboard ad in downtown San Diego addressing the persistent racism associated with honoring Dr. King in the region. The billboard featured an image of Dr. King, along with a multiple choice question that read “Welcome to America’s Finest a) city, b) tourist plantation, c) Convention Center.” Thanks to this action and the work of many San Diegans, the California State Legislature passed a resolution to rename the California 94 freeway to the Martin Luther King Jr. Freeway in 1989. 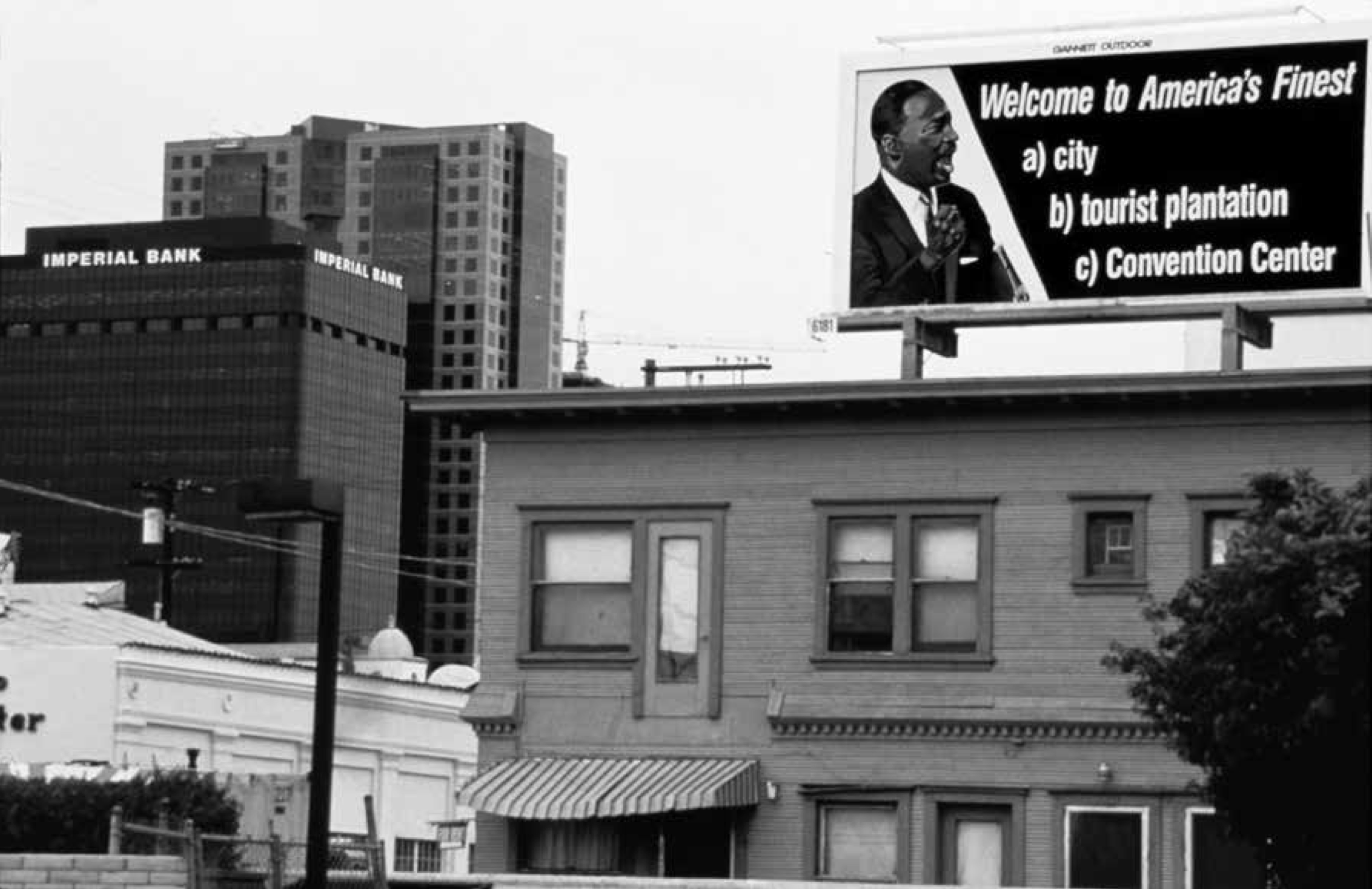 Learn more about the 33rd All Peoples Celebration

The All Peoples Celebration Over The Years

During this time of political upheaval and public debate, new alliances were formed by faith leaders, civil rights leaders, labor organizations, and others to address racial, social and economic disparities in San Diego’s communities of color. From here, the creation of a breakfast celebration that would reflect, memorialize, and honor the life and legacy of Dr. King was born. The first annual celebration was held in 1988, in a local church with a modest attendance.

By the third breakfast in 1990, the lead planning agency (the local chapter of National Conference of Christians and Jews) changed its name, leadership, and its national and local emphasis. Now the National Conference for Community and Justice (NCCJ), the group continued to commemorate Dr. King’s birthday and his role in the civil rights movement, but more focused as a collaborative community event with grassroots underpinnings of social justice.

In the decades since his death, a number of local observances —breakfasts, lunches, dinners, symposia, parades and other events — have been created to honor the Rev. Dr. Martin Luther King, Jr., each offering a unique interpretation of his legacy. The national King holiday evolved into a multifaceted celebration of the power and challenge of America’s diversity as well as commemoration of its civil rights leader and achievements. NCCJ’s All Peoples Breakfast focused on social justice themes that reflected King as a moral warrior, an apostle of nonviolence, and a visionary of the “Beloved Community”.

In late 2004, the national NCCJ closed its local affiliate. With the event in danger of fading away, the City of San Diego Human Relations Commission received approval to assume leadership of the annual All Peoples Breakfast. With just a few weeks to put together the January 2005 event, the Commission's executive director, Ashley Walker, reached out to social justice activists and organizations to plan, convene and sustain the celebration. The success of their efforts, and the enthusiasm with which the 2005 All Peoples Breakfast was embraced, surpassed all expectations. One notable innovation was the Community Space, a new tradition showcasing community service organizations.

Said Ashley Walker, 2005-2009 Co-Chair of the Host Committee, “our goal was to honor the whole person and his dynamic legacy. Dr. King challenged us to look beyond our individual comfort and interests to work for the good of all people. All that remains is to send it back into the community that created and nurtured it.” 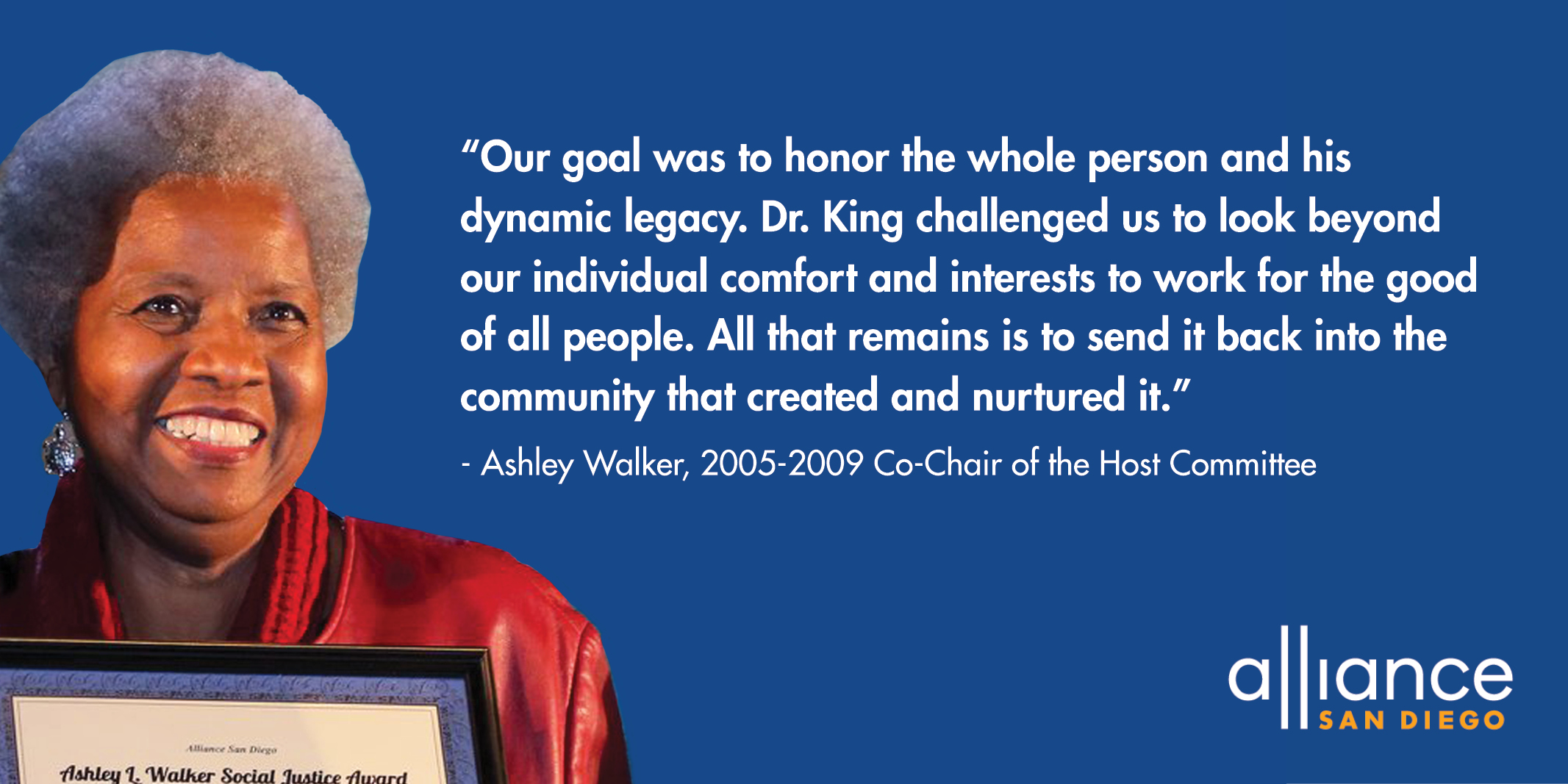 Click here to register for the 33rd All Peoples Celebration 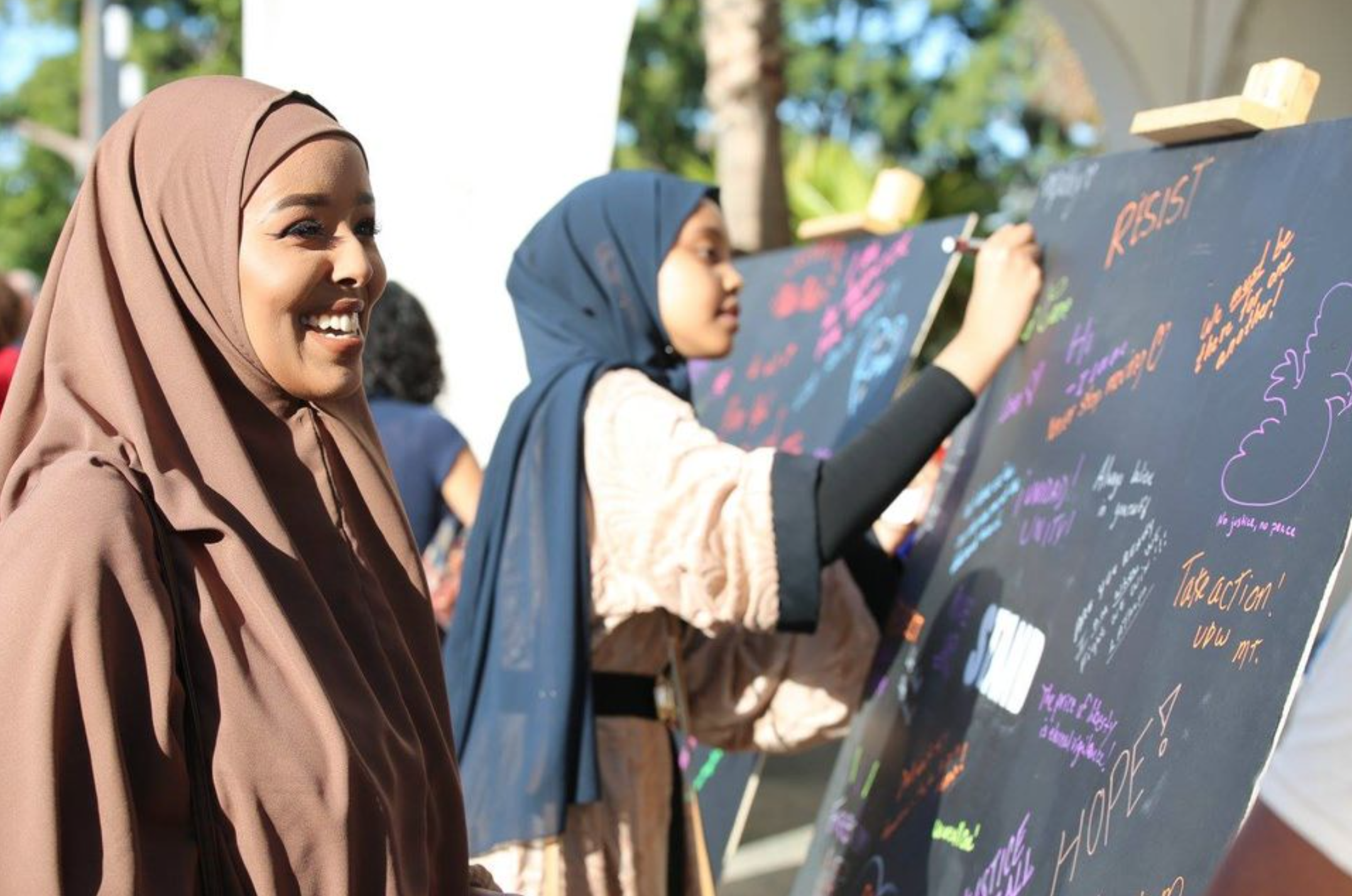 The All Peoples Celebration Now

The All Peoples Celebration is now one of San Diego’s preeminent celebrations of Dr. King. Every year this celebration brings together over one thousand diverse community members, elected officials, faith leaders, community and labor organizations, artists, and residents to honor the life and legacy of Dr. King. At the All Peoples Celebration attendees recommit themselves to honor Dr. King’s teachings through their work to build a more inclusive democracy, and manifest Dr. King’s vision of the “Beloved Community”. In recent years we’ve had the honor of inviting keynote speakers such as civil rights leader Rev. Dr. William J. Barber II, immigrant youth champion Greisa Martinez Rosas, and others who have advanced the movement in the struggle for social justice.

Every year, musicians, dancers, performers and speakers take to the stage to create an inspiring program and uplifting energy that all in attendance feel and connect with, and this upcoming celebration will be no different! We’re excited to have Rev. Dr. Yvette Flunder as the keynote speaker for the 33rd annual All Peoples Celebration, as well as spoken-word poetry performance by Emmy award winning poet Boris “Bluz” Rodgers and musical performances by Sarah Geok, Travis Staton-Moreno & The Bengsons. You can preview our full program and learn more here on our website. The 33rd All Peoples Celebration will be held virtually on January 18th, 2021, from 10:30am - Noon. We invite you to join us for this event by registering here. 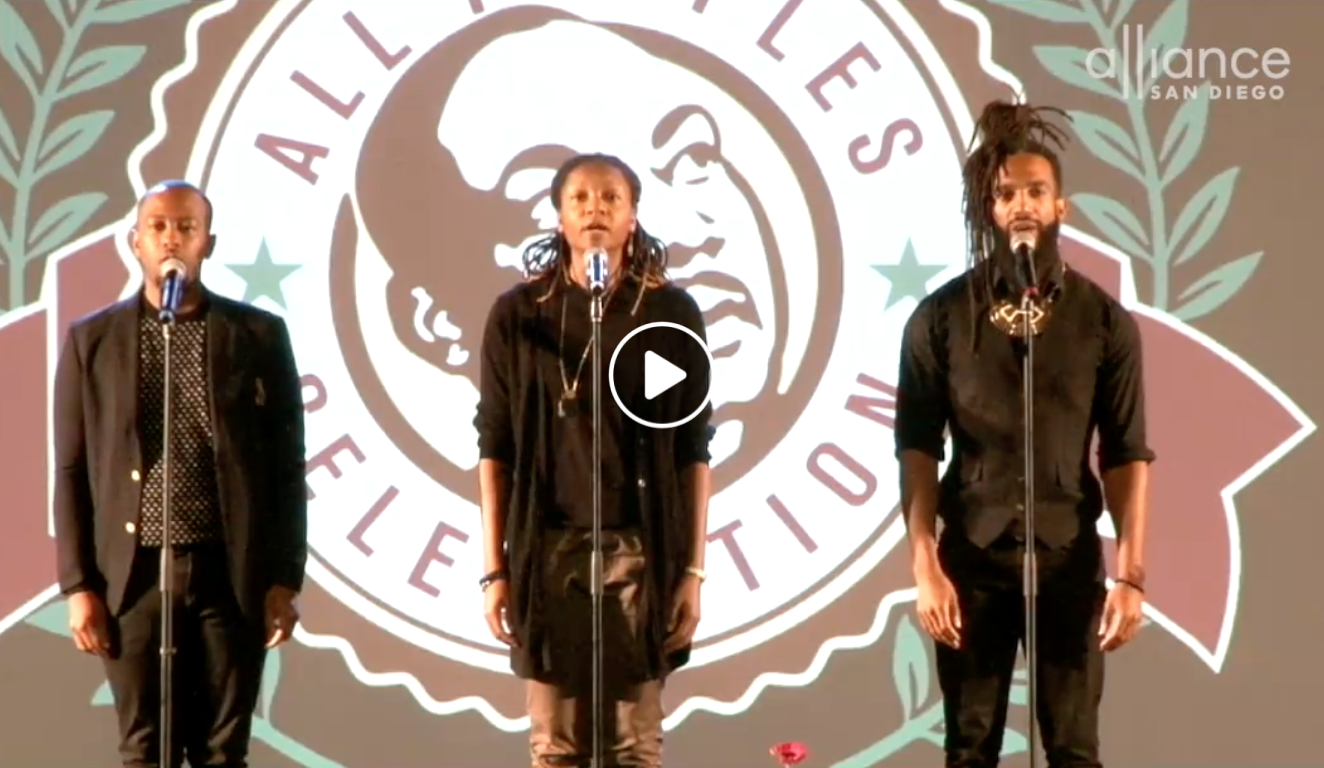