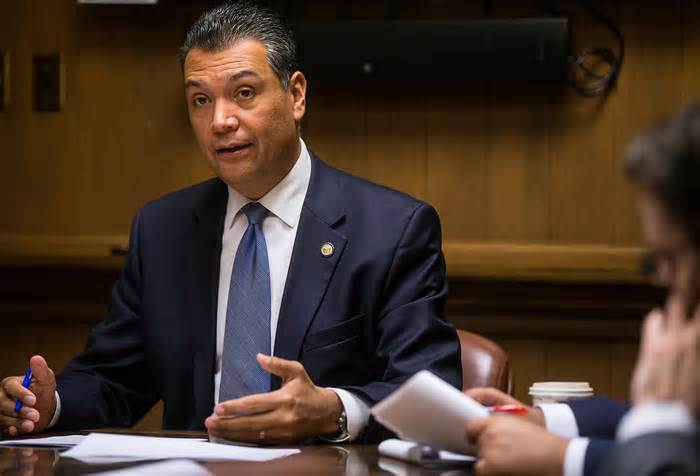 Bill allows Janine Bouey and other DHS victims to pursue justice in court.

SAN DIEGO, CA -  For the first time, new legislation introduced by Senator Padilla, called the Accountability for Federal Law Enforcement Act, would allow people abused by federal law enforcement officers to sue them in court to enforce their civil and constitutional rights. Currently, that is not possible. Federal law only allows people to sue state and local officers except in limited circumstances and only before a judge, not a jury. This bill would expand federal law so that people like Janine Bouey can sue the officers from the Department of Homeland Security (DHS) who sexually assaulted her and she can have her claim heard by a jury drawn from the community.

Janine, who is a retired LAPD officer and US Army veteran, was sexually assaulted by DHS officers at the Otay Mesa Port of Entry in June 2020. She was singled out by an officer while waiting in line reading her book – she was the only Black woman in line. The officer asked Janine for her home address even though he was holding her license. He suggested that Janine might want his home address. The officer then escorted her to the port building where she was assaulted. Janine filed a complaint with DHS shortly after the incident. To her knowledge, no disciplinary action was ever taken and the officers involved in the incident remain at work.

There is a great deal at stake. Janine was not the first woman to be assaulted by DHS officials and she was not the last. With the help of her attorneys, Janine has used the limited legal remedies available to her to file a claim under the Federal Tort Claims Act, which does not directly address civil and constitutional rights nor does it provide her the right to have her claim heard by a jury. With the passage of Senator Padilla’s bill, Janine and others whose rights have been violated by DHS and other federal officials could enforce their rights in civil court before a jury drawn from the community in which the abuse took place. That is how the system should work.

I want to thank Senator Padilla for introducing this bill to help people like me pursue justice against DHS and other federal officers. One year ago, I was sexually assaulted by federal officers at the Otay Mesa Port of Entry in San Diego. To my knowledge, no officer has been held accountable. After a degrading, demeaning, and dehumanizing experience that lasted several hours, I asked the officer who finally released me what he would think if his Black mother was mistreated this way, and he said simply “these things happen.” But they should never happen. Padilla’s bill makes it easier to get justice, especially for Black women and men and other people of color whose civil and constitutional rights are regularly violated in this country. We need a statutory right to go into court to enforce our rights, hold federal agents accountable, and keep this from happening to other people in the community, including our children and grandchildren. This bill is critical and we hope other members of Congress will support it.

Senator Padilla’s bill is the mechanism we need to enforce the civil and constitutional rights we all have. Our rights are meaningless if we don’t have a way to enforce them. Without them, we are all in danger. One of the most important rights is our Fourth Amendment right to be free of unreasonable searches, which DHS violated when they conducted a search of Janine that was so invasive it amounted to sexual assault. Without this bill, federal law enforcement officials will continue to get away with abusing their power and harming the community. This bill gives us the right to go into court with a claim against federal officials that is heard by a jury. It is the same right that we have to bring claims against state and local police. It is essential to accountability.

What happened to Janine is unacceptable. Unfortunately, it happens over and over again, especially to people of color, as part of a pattern of abuse that has long gone unchecked. Until now, community members have had little to no remedies to enforce their rights against federal law enforcement officials in a court of law. Senator Padilla’s bill is welcome legislation. If the bill passes, the people of this country, for the first time in the nation’s history, will have a statutory right to hold federal officials accountable for violations of civil and constitutional rights. That accountability builds trust in government and is key to a healthy democracy.

Over the last week, Alliance has received half a dozen calls from people who have been abused by law enforcement. We are providing assistance and referrals as needed. We invite other community members to call and share any abuse they’ve experienced.