SAN DIEGO  — Today, the League of Women Voters of San Diego and Alliance San Diego filed a complaint calling for a criminal and civil investigation of the San Diego County Assessor/Recorder/Clerk Ernest J. Dronenburg, Jr. and his staff for using taxpayer resources to illegally campaign against Proposition 15, an initiative measure on the November 3, 2020 election ballot.

The complaint was filed with the California Attorney General, the Fair Political Practices Commission (FPPC), and the San Diego District Attorney, all of whom have jurisdiction to investigate the Assessor’s Office.

According to the complaint, County Assessor Dronenburg and his staff have violated California law by using the full weight and power of his elected office to campaign against a statewide ballot measure that his office will be tasked with implementing if it were to pass.

Examples of his misappropriation of public resources include the following:

1) San Diego County Assessor illegally campaigned against Prop 15 using his name, title and the official seal of his office for political purposes during a meeting with the Board of Supervisors on Tuesday, September 15, 2020 (see starting at 6:33:25). 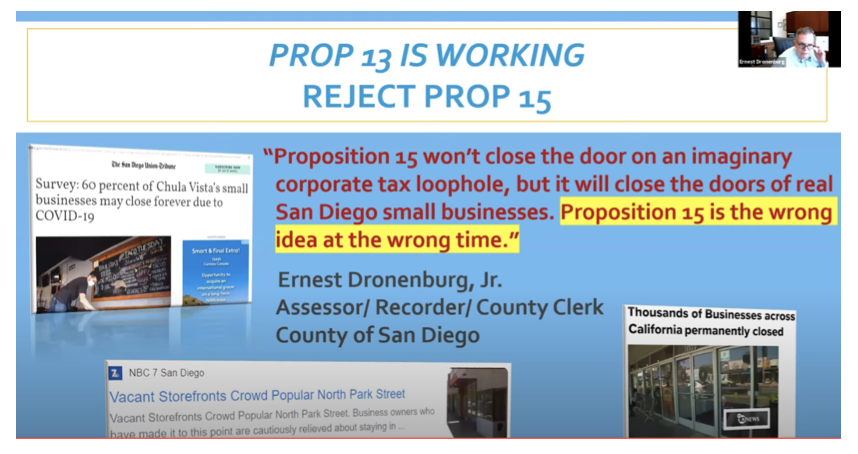 Lori Thiel, Director of the League of Women Voters of California, said the following:

“As an organization that was founded on the right to vote, the League of Women Voters has 100 years of experience protecting the right to vote for all citizens, combating corruption in politics, and advocating for fair elections. Political corruption includes the abuse of the power of an elected office.

Mr. Dronenburg’s egregious misuse of a government office to openly advocate against a proposition in clear violation of multiple statutes must be addressed. As stated by the California Supreme Court: 'A fundamental precept of this nation’s democratic electoral process is that the government may not ‘take sides’ in election contests or bestow an unfair advantage on one of several competing factions.” The integrity of our democratic system depends upon a constitutional commitment to elections “free of partisan intervention by the current holders of governmental authority.”

The League of Women Voters of San Diego is strongly committed to standing by these principles and speaking up when citizens are being misled and misinformed. We respectfully ask you to protect our rights to a fair and unbiased election.”

“Alliance San Diego is committed to building a functioning democracy that is based on the pillars of good governance: transparency, accountability, and oversight. We joined in the complaint against the San Diego County Tax Assessor because he and his staff have repeatedly violated the oath of their office. As public servants, they are charged with serving the public interest, not personal or private interests. Using taxpayer resources — salaries, computers, office space, research tools, etc. — to campaign against a ballot measure is inappropriate and illegal.

The tax assessor has not only illegally campaigned here in San Diego County, but he is using his platform as president-elect of the California Tax Assessors Association to campaign across the state. Moreover, he and his staff are using government resources to lie about Prop 15. Not small lies, big lies. For example, they continue to assert that Prop 15 will impact homeowners and home-based businesses even though a judge determined that those kinds of statements are false and misleading and struck them from the ballot argument against the initiative. This kind of blatant abuse of power is an affront to the people of San Diego County. It must stop.

We call on the Attorney General, FPPC, and District Attorney to immediately investigate the Tax Assessor’s misappropriation of government resources to illegally campaign.”

About the League of Women Voters

The League of Women Voters, a nonpartisan political organization, encourages informed and active participation in government, works to increase understanding of major public policy issues, and influences public policy through education and advocacy.