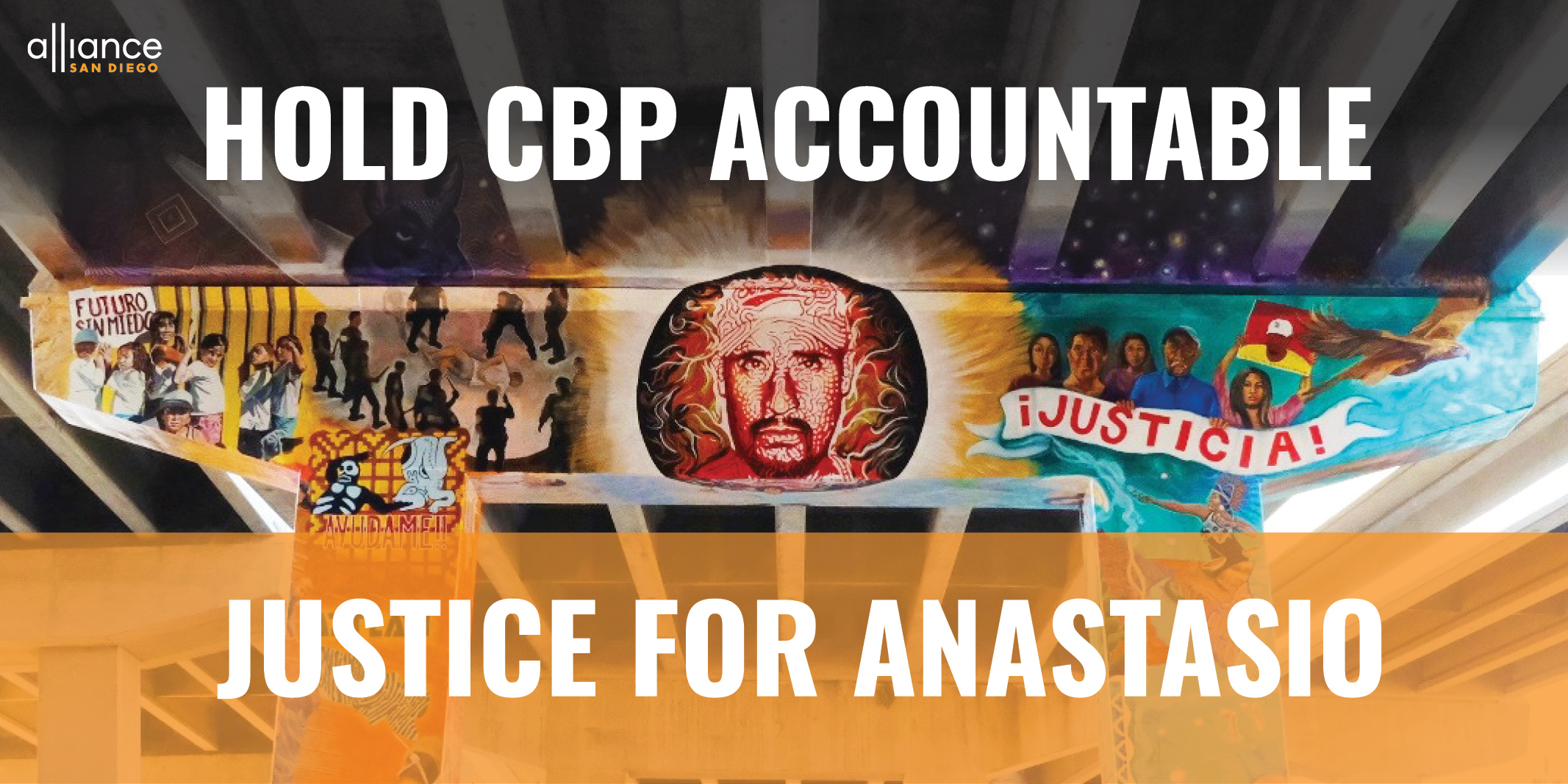 New testimony strengthens the case of Anastasio Hernandez Rojas, the first extrajudicial killing case brought before the IACHR against the United States

SAN DIEGO, CA — Today, the family of Anastasio Hernandez Rojas announced the filing of new testimony from three former Department of Homeland Security (DHS) officials who point to a cover up in a landmark case before the Inter-American Commission on Human Rights (IACHR). The Hernandez case epitomizes the abuse, corruption, and impunity that pervade the U.S. Customs and Border Protection (CBP).

The testimony by high-ranking officials reveals the structural reasons that CBP, the nation's largest enforcement agency, has evaded oversight and accountability, and reinforces the Hernandez family's call for a ruling by the IACHR to address ongoing injustice.

The Hernandez family brought the case before the IACHR in 2016, after the Department of Justice declined to prosecute the agents involved in the brutal beating and torture of Anastasio, which was captured by eyewitness video, despite efforts by CBP to destroy all evidence. The family asserted not only that the excessive use of force violated its human rights obligations, but the agency’s attempt to cover it up was emblematic of a system designed to condone abuse and corruption and shield border agents from accountability.

In a decision issued on July 28, 2020, the IACHR established that the Hernandez family had demonstrated prima facie human rights violations linked to the torture and killing of Anastasio Hernandez Rojas. The Commission now turns to the question of systemic abuse, corruption, and impunity. The IACHR has investigated some of the most egregious human rights abuses in the Americas, including the mass abduction and disappearance of 43 students in Mexico in 2014; the largest massacre in recent Latin American history, the massacre at El Mozote, El Salvador; and the disappearances of civilians during Argentina and Chile’s military dictatorships. In similar cases, the Commission has instructed the government to reopen criminal investigations, enact law reform, publicly apologize, and provide the victims and their relatives with reparations.

This is the first known extrajudicial killing case that will be decided involving U.S. law enforcement. The outcome of this case could set a precedent for other cases against both border authorities and police who have killed with impunity.

The family is represented by the UC Berkeley Law School’s International Human Rights Clinic and Alliance San Diego. This case is about more than one family. It's about a failed system of justice and accountability in this country. That issue has never been more important than it is now, in this moment of national reckoning to address police violence that is disproportionately felt by Black and Brown communities. The Anastasio case is an opportunity to challenge systemic issues and pursue policy change as a remedy that restricts use of force and increases oversight and accountability to end an era of impunity. The next step will be a hearing in front of the IACHR, where the government will have to answer for its actions.

Maria Puga, widow of Anastasio Hernandez Rojas and petitioner in the case, said:

“More than anything, I want an apology for what border agents did to my husband. They treated him like an animal, not a human and they killed him. They destroyed my family and they continue to destroy other families. They will not stop until they are held accountable. That is why we are also asking for a new investigation that looks at the evidence that was ignored and looks at the attempt to cover up what happened. We are asking for changes in our laws so that other families don’t have to suffer the pain and indignity that we have suffered.”

“In my opinion, there was a dereliction of duty by the OIG in Mr. Hernandez Rojas’s case. A man died and the questions that should have been asked about his death, and the events leading to it, were not asked. The OIG had a duty to properly investigate the matter and uncover the facts that led to the death of Mr. Hernandez Rojas. This was not done.

It was a second failure not to reopen the matter. In my opinion, the investigation should have been re-opened based on the lack of diligence and based on the new evidence. The video that came to light showed the victim subdued, on the ground in handcuffs when the officers claimed he was standing and combative. The video showed a man being Tased while detained. This conduct warrants a criminal investigation.”

“In comparison to the other agencies I served during my thirty-five years in state and federal law enforcement, CBP had the worst accountability measures. This was by design; CBP was allowed to operate as a rogue agency within the U.S. government. My official role as Deputy Assistant Commissioner of Internal Affairs was to ensure compliance with all CBP-wide programs relating to corruption, misconduct, and mismanagement, but I was not allowed to do my job. CBP leadership was reluctant to hold agents and others within the agency accountable for their actions, including if they were involved in criminal activity.

For instance, Border Patrol used an administrative subpoena to obtain a copy of Mr. Hernández Rojas’s autopsy. This is an improper if not a criminal use of an administrative subpoena, which is only authorized for immigration matters. Border agents also erased eyewitness video footage. By destroying the videos, agents tampered with evidence and should have been prosecuted for that conduct. It is also strange but unsurprising that the San Diego Police Department was not immediately notified of the incident but learned about it the next day although local police have jurisdiction to investigate. CBP often took into their own hands investigations they had no authority to conduct.

CBP leadership’s priority was to protect the reputation of the agency, even if it meant allowing misconduct and corruption to go unpunished. But in this country, no agent should be immune from investigation.”

“Law enforcement has a corruption problem throughout the United States, but nowhere is it as much of a problem as it is in CBP. While I served as Assistant Commissioner for Internal Affairs, We found that corruption rates were 7-10 times higher than any other federal law enforcement agency. This was the case in what has become the nation’s largest law enforcement agency. When I raised the alarm, agency leadership tried to cover it up, just as they tried to cover up what happened in Anastasio’s case. No other agency has such severe integrity problems. No other agency goes to such lengths to shield their agents from accountability. The injustice of the Anastasio case was not an isolated incident. The abuse, the corruption, and the impunity has happened again and again, and will continue to happen until something changes. Given the size of the agency and the scope of the problem, new laws are needed to ensure that CBP is accountable.”

“These former DHS officials have revealed how impunity is preordained not just in this case but in other killings by law enforcement at the border. CBP has designed a system that shields border agents from oversight and tolerates misconduct and corruption. Impunity is the inevitable result of a lack of effective accountability mechanisms and use of force laws that authorize unnecessary and disproportionate force. We are all in danger when the largest enforcement agency in the country can viciously beat and Tase without repercussion an unarmed person in custody while he is handcuffed on the ground begging for mercy.”

“Since Anastasio’s death, more than 100 men, women, and children have been killed by border agents — the most recent killing occurred last week — and no agent has ever been held accountable. Families grieve while agents are promoted, like Rodney Scott who was part of the coverup in Anastasio’s case and now leads the U.S. Border Patrol. Absolute power corrupts absolutely and that is exactly what is happening at CBP.

Without real accountability to check these powers, we are all in danger, especially as CBP seeks to expand its reach to become a national police force, as evidenced by their surveillance of Black Lives Matter movement activists and their excessive use of force in response to protests denouncing police violence around the country this past year. The Inter-American Commission has recognized that governments have a special duty to investigate law enforcement misconduct and especially extrajudicial killings.

As the first case of a U.S. extrajudicial killing to go before the IACHR, Anastasio’s case presents an opportunity to understand systemic impunity and do something about it. We are humbled to walk alongside the Hernandez family in their pursuit of justice.”

On May 28, 2010, border agents at the San Ysidro Port of Entry brutally beat and Tasered Anastasio Hernandez Rojas, a longtime resident of San Diego, leading to his death, which was classified by the San Diego County Medical Examiner as a homicide. An eyewitness recorded the incident and the video became international news, calling into question the brutality of CBP, which has long been alleged in the repeated abuse of border residents. The incident and the many others that followed it triggered Congressional inquiries, agency-wide investigations into the use of force, new use-of-force policies that, among other things, limited the use of Tasers, and the piloting of body-worn cameras by agents. But these have not been enough to reign in an agency with excessive power and little to no oversight or accountability.

The family of Anastasio Hernandez Rojas has brought a complaint against the U.S. government for failure to properly investigate and prosecute this case. Not only was Anastasio’s life taken, but evidence was destroyed, eyewitnesses dispersed, and the investigation was woefully inadequate. Through this claim, the Commission has the opportunity to weigh in on a broken justice system and point to reforms that end the impunity of the nation’s largest law enforcement agency.