DREAMER: I Was Invited to the State of the Union. This is What It Was Like. 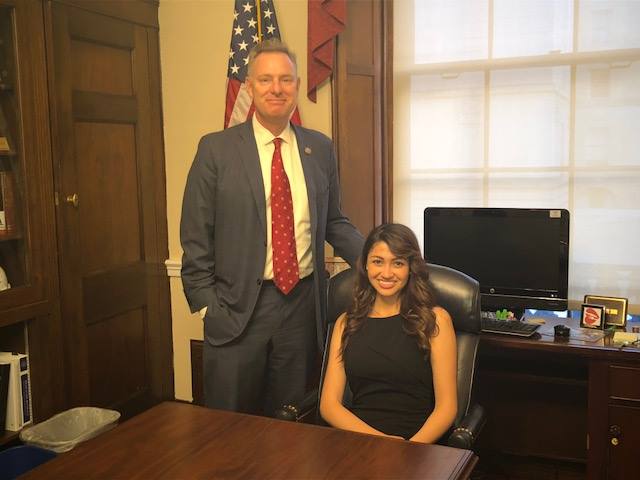 Democratic leaders from the House and Senate welcomed the largest group of Dreamers to attend a State of the Union address. I stood in disbelief when I received an invitation and I want to thank my congressman, Scott Peters, (D-CA), for making the cordial invitation and standing with Dreamers like myself. It was a remarkable statement of resistance and it sent other members of Congress the message of urgency for a narrow, bipartisan bill that would protect Dreamers all across the country.

Moments before President Trump took the stage, I was escorted by my congressman to my seat. I scanned the House of Chambers from the upper balcony and immediately attempted to make eye contact with attendees who wore “migrating butterfly stickers” in a show of support for immigrants, refugees, and Dreamers. We acknowledged each other's presence and stood there in solidarity shaking our heads and raising our eyebrows through what turned out to be a distasteful, hate-filled speech.

The SOTU was a message of intolerance. It left a bitter taste in my mouth and a deep void in my stomach.

Its mission to divide and evoke fear in immigrant communities was hurtful and manipulative. The illusion that somehow America has put immigrants ahead of its citizens is offensive and untrue.

The reality is that Donald Trump created this crisis when he rescinded DACA, leaving 800,000 Dreamers like myself vulnerable to deportation. The term “Dreamer” is one that has been coined to refer to the generation of immigrants who came to the U.S as children. Our lives are now in limbo because of a cruel decision.

Trump attempted to reclaim the label of "Dreamer" from us by stating that "Americans are dreamers too". Let's not fall into this false narrative that it is an "us versus them" debate. The only distinction between us is a piece of paper, but Dreamers embody the same American values.

As a Dreamer, you grow up hoping that one day you would have the same opportunities as a citizen. That you would be granted and treated with the same civil rights and liberties. No one has ever told Americans that they have no right to dream, in all contrary, we are one. Dreamers are Americans too.

That’s why now, more than ever, we are urging Congress to permanently find a solution to a long-lasting problem. Donald Trump has created this problem and Congress must work together to fix it. It is the ethical and moral thing to do.

Karen Bahena is a Border Dreamer who lives in San Diego, California