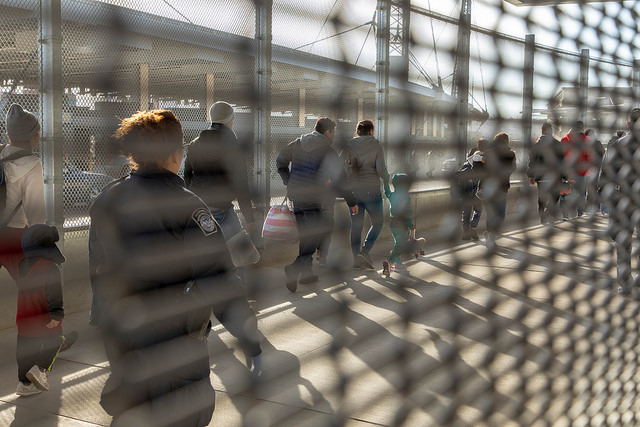 As part of a border community, Alliance San Diego works towards the humane treatment of all people, including migrant families seeking protection at our border. Over the last decade we have borne witness to increasingly harsh border militarization policies that are driven by rhetoric, not reality, and ignore the impact on real people. Under the Trump administration, border rhetoric has reached a fever pitch and so have assaults on border communities and those seeking safety within them.

In the latest in a series of unrelenting assaults on our community, the Trump administration has begun the problematic and possibly illegal practice of expelling people to Mexico through our local port of entry after processing them as asylum seekers. Upon their expulsion, the asylum seekers are given a date to appear in court in the United States to present their claim, but the obstacles are overwhelming and the dangers are deeply troubling.

Imagine you traveled thousands of miles, through multiple countries, and waited months for your turn to ask for protection from the one country you thought could give it — the United States. You tell U.S. officials you’re afraid of returning to your home country, but you don’t tell them you fear for your safety in the country you just passed through because no one asked and you don’t know it’s important to tell them. After all, you are now on U.S. soil.

Even if they did ask and you told them you feared being harmed in Mexico, you would have to prove you were in danger. You need help to do that and you don’t have it. You don’t know how the process works.

When the U.S. official finishes talking to you, you’re put in a holding area for awhile, maybe overnight, before being taken outside to the entry gate for Mexico, the place you just left, and told you must return while awaiting your court date. You’re given a piece of paper with a date to come back to the border to be transported to court in downtown San Diego.

The date you’re given for court is a couple of months away. You’re given a list of legal service providers in San Diego. You’re then handed over to Mexican officials and processed into Mexico. No one ever asked you if wanted to go there and you are worried about what might happen to you.

Help is out of reach.

Once in Mexico, you try to call the legal service providers in San Diego but realize you have to make an international call to reach them. You find the money to call and the office you reach tells you they can’t help you because they can’t go to Mexico. Maybe they don’t have passports or can’t practice law there. Or maybe they simply can’t afford the time it would take to travel across and wait hours in line to go back. Their caseload is heavy with the lives of many people in the balance who have fallen victim to Trump’s harsh enforcement policies.

You ask for help from lawyers in Mexico, but they tell you they can’t practice law in the United States. They have the same concerns as the U.S. attorneys, but in reverse. So you decide to go it on your own, but you don’t know anything about the legal process. You show up on the date the U.S. officials gave you and you are told your hearing was canceled because of a government shutdown over an argument about a border wall, which doesn’t make sense because you’re standing in front of one.

Your faith in the United States evaporates. Your visa in Mexico is temporary and you fear being deported to the place you fled for your life. You start to lose hope and you wonder if maybe that’s exactly what Trump wanted all along.

The United States has an obligation to protect asylum seekers.

The Trump administration asserts that it has the authority to send people to Mexico pending their court hearing in the United States under section 235(b)(2)(C) of the Immigration and Nationality Act, which states that the government “may return the alien to that territory pending a proceeding.” But the United States has a higher obligation under both international and domestic law to protect asylum seekers.

Under international principles of non-refoulement, the United States has an obligation to protect asylum seekers and, under domestic law, cannot return or expel them to a country where they might be in danger of persecution. We have a moral and legal obligation to protect people who fear for their lives. Despite our obligations, the Trump administration is now expelling people.

The system is designed to fail the most vulnerable.

According to a new Customs and Border Protection (CBP) protocol, the U.S. government will not return asylum seekers to Mexico if they affirmatively state a fear of Mexico. But it’s not clear that CBP officers have an affirmative duty to ask about that fear. Asylum seekers are in a high-stakes game, but they have not been given the rules.

Even if asylum seekers express a fear of return to Mexico, that won’t be enough to save them. The protocol requires them to speak with an asylum officer about that specific fear and they must meet a high burden of demonstrating that it is more likely than not that they will face persecution if returned to Mexico.

Mexico could say No to the United States.

The Mexican government states that there is one word to describe the experience of migrants in its country and that is “horror” full of abuses and human rights violations. Tijuana, the city that asylum seekers are expelled to, has become one of deadliest cities in the world with record high homicide rates that threaten the lives of migrants fleeing violence. The Mexican government has not provided any assurances that expelled asylum seekers will be safe and has not demonstrated that it is able or willing to protect them from persecution. Instead, they have made clear that Mexico is not a “Safe Third Country.” This is true in every sense of the term.

The United States bears the responsibility for a policy developed unilaterally that returns people to potential danger in violation of its moral and legal obligation to protect those seeking safety. But Mexico also bears responsibility for enabling the implementation of this extremely problematic policy. Mexico’s sovereign authority begins where U.S. authority ends -- at the border. Mexico has exercised that authority to declare who it will not accept back, such as unaccompanied minors, elderly, and people with health conditions. But it could simply say No, it won’t accept anyone who the United States seeks to forcibly expel.

Both countries should engage in best practices to protect human rights.

Families fleeing dangerous situations have the right to seek protection in the country where they feel safe. The United States and Mexico are at their best when they honor this obligation and do so with compassion, dignity, and respect for the migrants seeking asylum.

The Global Compact for Migration embodies these values and provides a framework for the treatment of migrants. The compact was formally endorsed by the United Nations General Assembly on December 19, 2018, ironically the day before the Trump administration announced it would return asylum seekers pending their court proceedings. Those returns began this week with one man and could soon grow to thousands across the southern border region.

No one asks migrants if they want to return.

U.S. and Mexican officials point out that people returned will have humanitarian visas issued by Mexico allowing them to work and live in Mexico pending their court hearings. But that does not eliminate the fear that asylum seekers might have of returning to Mexico — a fear that is justified given the violence in Tijuana, the harm that has already come to migrants, and the exposure that expelled asylum seekers will now have.

Some say that the visa — a visa that Mexico’s National Institute of Migration says it will give migrants either before or after they have been processed by the United States for an asylum claim — is what distinguishes the returns from improper expulsions. But it is not the visa that should be the determinant. It is the will of the migrants. Are they consenting to their return or are they being forced against their will? There is nothing in the U.S. protocol that directs officers or agents to ask for consent.

The consent of the migrant should be important to Mexico. The migrants entering Mexico at its southern border from Guatemala are coming willingly and Mexico, in its interpretation of the Global Compact and in adherence to its own values, is allowing them to enter and endeavoring to treat them with compassion, dignity, and respect. While this new posture is laudable, Mexico should recognize that the asylum seekers returned by the United States are not coming of their own free will. It appears they are being forcibly returned and Mexico should not be complicit in their expulsion.

We know the right thing to do.

Families fleeing dangerous situations have the right to seek protection in the country where they feel safe. If that is the United States, then we must offer a meaningful opportunity for them to make their claim and be safe while doing so. It is not only our legal obligation, but also the right thing to do.

Andrea Guerrero is the executive director of Alliance San Diego.